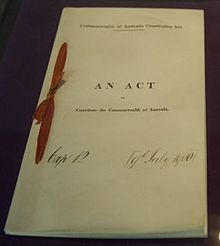 Requests and inquiries concerning reproduction and rights should be addressed to ComLaw, which is managed by the Office of Parliamentary Counsel.

ComLaw produces official versions of Australian legislation, including the Constitution, and would be best placed to deal with your request. The Parliament.

Section 44 of the Australian Constitution

Taxation of property of Commonwealth or State States not to coin money Commonwealth not to legislate in respect of religion Rights of residents in States Recognition of laws etc.