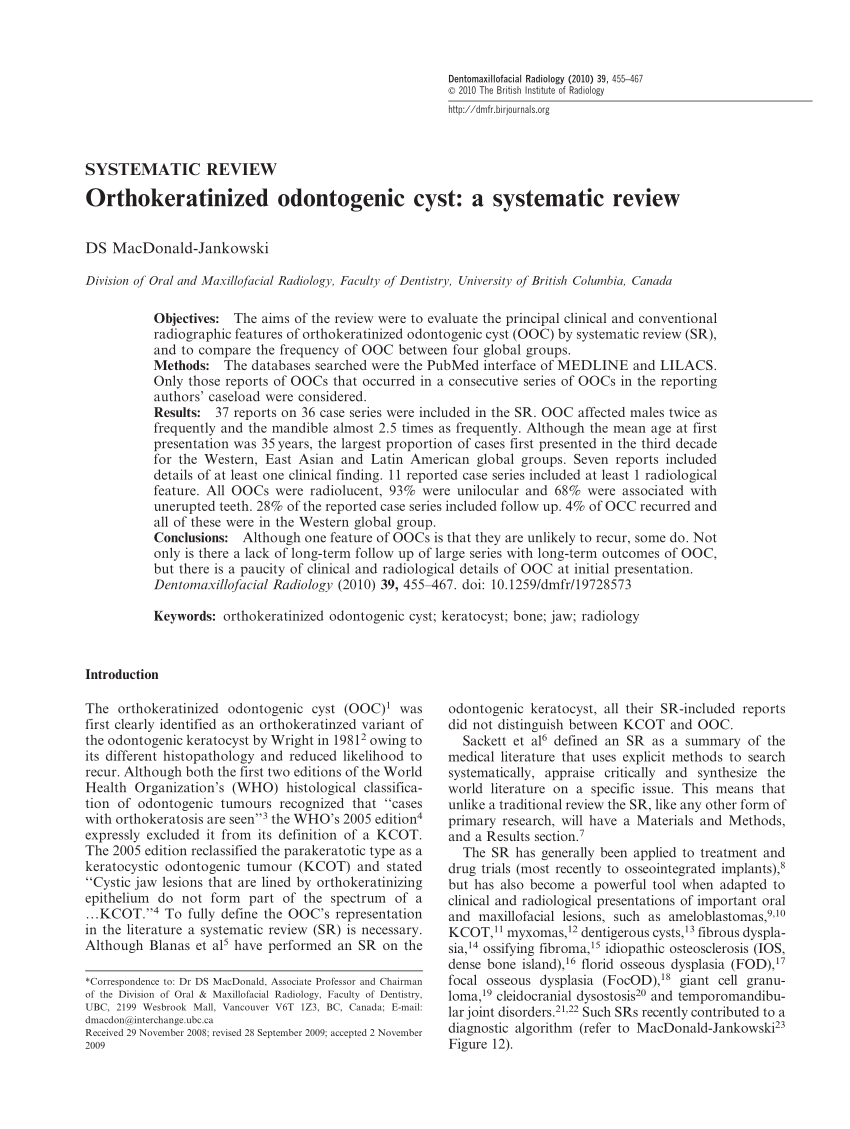 Only those reports of GOCs that occurred in a series in the reporting authors' caseload were considered. All cases were confirmed histopathologically.

GOC affected males twice as frequently and the mandible almost three times as frequently. The mean age at first presentation was 44 years, coincident with that of the Western global group, in which the largest proportion of reports and cases first presented in the second half of the fifth decade.

However, age at presentation of GOCs in the East Asian and sub-Saharan African global groups was nearly a decade younger, this was significant. Six reports included details of at least one clinical presentation.

How to drive a manual car game

Eight reports included at least one conventional radiological feature. There were some significant differences between global groups. The Western global group had a particular predilection for the anterior sextants of both jaws.

The sub-Saharan African group displayed buccolingual expansion as did the Latin American group and tooth displacement in every case. GOCs have a marked propensity to recur in most global groups. GOCs presented in older patients and with swellings, affected the anterior sextants of both jaws, and radiologically were more likely to present as a well-defined unilocular radiolucency with buccolingual expansion.

This is, in large part, due to the GOC's complex and frequently non-specific histopathology. Slootweg 3 added that the mucus-producing cell contributes to the GOC's histopathological resemblance to a well-differentiated low-grade mucoepidermoid carcinoma, requiring entirely different management.

Although only a recently recognized clinical entity, the GOC is nevertheless an important lesion to recognize and diagnose, because of its potential for aggressive behaviour and a tendency to recur.

Since this lesion was first recognized, an adequate number of case series have been published to permit a systematic review SR to be performed to determine not only the clinical and radiological features and outcomes of this lesion globally, but also any variation in its presentations within specific communities.

Furthermore, such an SR is more likely to reveal any deficiencies in this reported knowledge that should be addressed in later reports. One important point is now clear: Kaplan and co-authors 1 recently recommended more stringent criteria for the histopathological diagnosis of GOC see Discussion.

From this recommendation it can be readily concluded that the histopathology of the GOC can be so non-specific, in some cases, as to render it insufficient as the sole test for every case of suspected GOC. Therefore, clinical and radiological features, if they exist with any degree of specificity, should be identified and be recruited to refine further the diagnosis of those cases for which histopathological diagnosis is ambiguous.

For example, such a radiological criterion, marginal definition, has been applied to distinguish between the two fibro-osseous lesions, the fibrous dysplasia, a hamartoma; and the ossifying fibroma, a neoplasm.

Although many syntheses have been published so far, none has followed the formal approach of the SR. Sackett and co-authors 7 defined an SR as a summary of the medical literature that uses explicit methods to search systematically, appraise critically and synthesize the world literature on a specific issue. 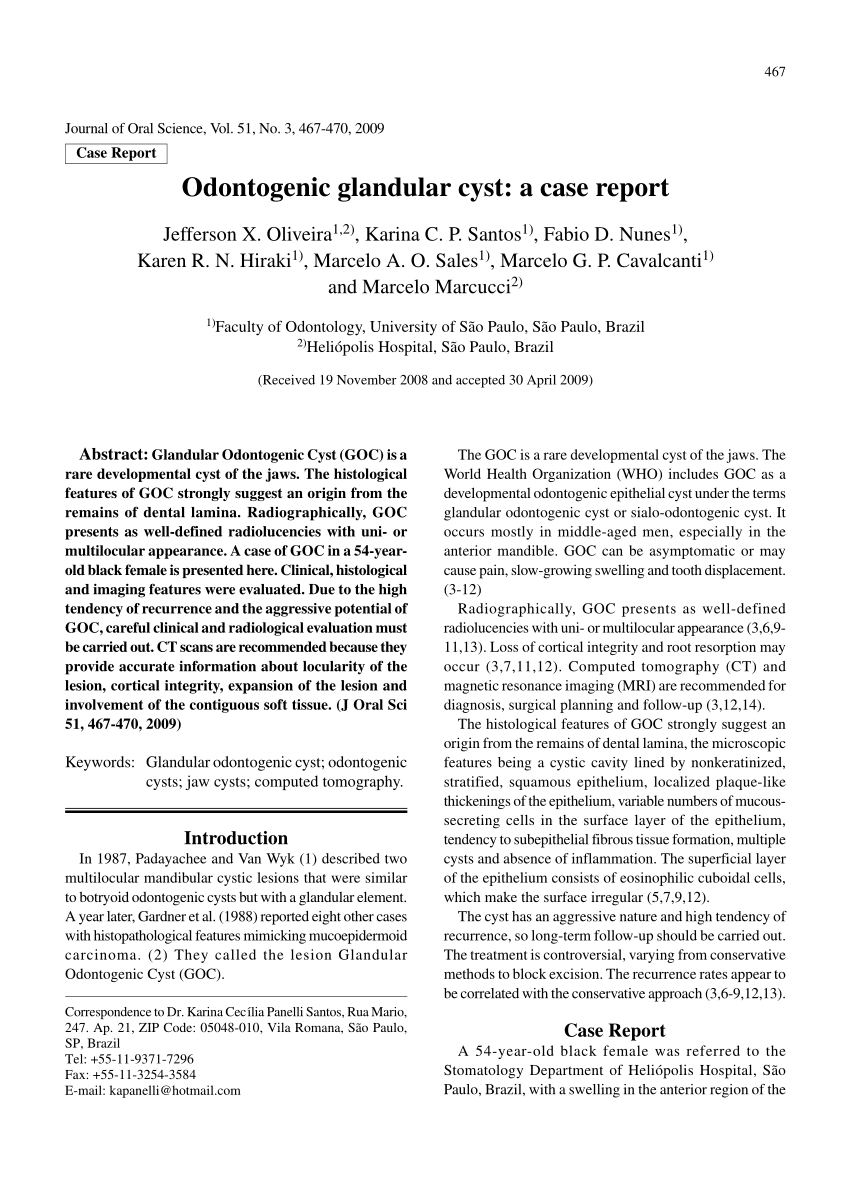 The SR has generally been applied to treatment and drug trials most recently to osseointegrated implants , 9 , 10 but has also become a powerful tool when adapted to the clinical and radiological presentations of important oral and maxillofacial lesions 6 and on temporomandibular joint disorders.

The principal aims are to include as many reports of consecutive series of cases of GOCs presenting for the first time in a particular community, and to evaluate the principal clinical and conventional radiological features of GOC by SR, and then to compare their frequencies between four global groups. In addition to a MeSH search, it integrated a free-text search supported both by handsearching of those journals, which are the natural destinations for reports on oral and maxillofacial lesions and by reference-harvesting of those reports identified by the database searches and handsearching.

They broadly reflect the main ethnic grouping of humanity. It has, hitherto, been generally well recognized that the frequencies and presentations of certain lesions differ between world communities.

A purpose of this SR is to identify such groups and to compare frequencies and presentations among them. The approach follows the SR procedure set out in earlier SRs for other oral and maxillofacial lesions, most recently the SR on fibrous dysplasia.

The search strategy and strategy for sifting the literature are set out in Figure 1. Both database searches and handsearches were last conducted on 10 February Y:N; yes:no; ant:post; anterior:posterior; ING, information not given; parakeratin. The titles and abstracts of all reports identified by the databases and handsearching were reviewed to determine whether they could possibly report a consecutive series of cases of GOC first presenting within a particular community.

The only exception was those reports which reported the presence of just one GOC within a particular community over a stated period of time.

Prior to this, their bibliographies reference lists were reviewed reference-harvesting to ensure that as many reports as possible could be included. There were two inclusion criteria 1 and 2 and three exclusion criteria A—C criteria for the SR. Each report passed through these criteria in strict sequence. For the sake of brevity, only those reports that cannot be readily included, by reference to their title or abstract, will be discussed and cited.

Information included in the SR was generally reduced to numbers and tabulated, which took account of the number of cases that passed the selection criteria, and, therefore, may differ from the numbers available in the original report.

Other details concerning the selection criteria were set out in a recent paper. Criterion 1. Consistency with the WHO classification. The study should represent a complete collection of cases of GOC, arising within a particular community, occurring in the reporters' caseload. Reports that were merely a selection of cases and those studies which were primarily concerned with specific investigations or a discrete age group, such as children or a particular jaw, were excluded.

Single and double case reports were excluded unless it was clear that they were not selected and arose within a particular community within a stated time interval.

The report was included only with regards to that particular feature. Therefore, it excluded those reports which included referred cases from outside that community. This is because they may possess unusual features that could skew the profile of GOC within that community, which would, in turn, skew the SR.

In order to include only reports of cases arising with that community, it excluded reports:.

Analysis of features that are either present or absent could be construed from a report. In this SR, such features were cortication and perforations. The mention of their presence in some cases, but not in others in the same report was interpreted as these features being absent. This strategy was not applied to those features pertaining to teeth, such as tooth displacement, root resorption and impaction or non-eruption, unless the reports expressly quantified the number of cases that were edentulous or otherwise, in the affected site.

The population of the USA was at the last census Although these four global groups are cartographically represented by four almost discrete regions, they are not primarily regional, because variable socioeconomic and other ethnocultural factors also play important roles that affect the availability and provision of diagnosis and treatment.

For example, the South Asian nations, including India, although largely Caucasian nations, are still developing their economies, along with many of those of sub-Saharan Africa. Although Africa itself is divided between a largely Caucasian North and a substantially Black sub-Saharan South, it is the latter that constitutes the bulk of both the population of the African continent and the African diaspora.

The important point of this global distribution is to determine the number, size and quality of the SR-included reports to determine which communities are well reported and which are underreported. 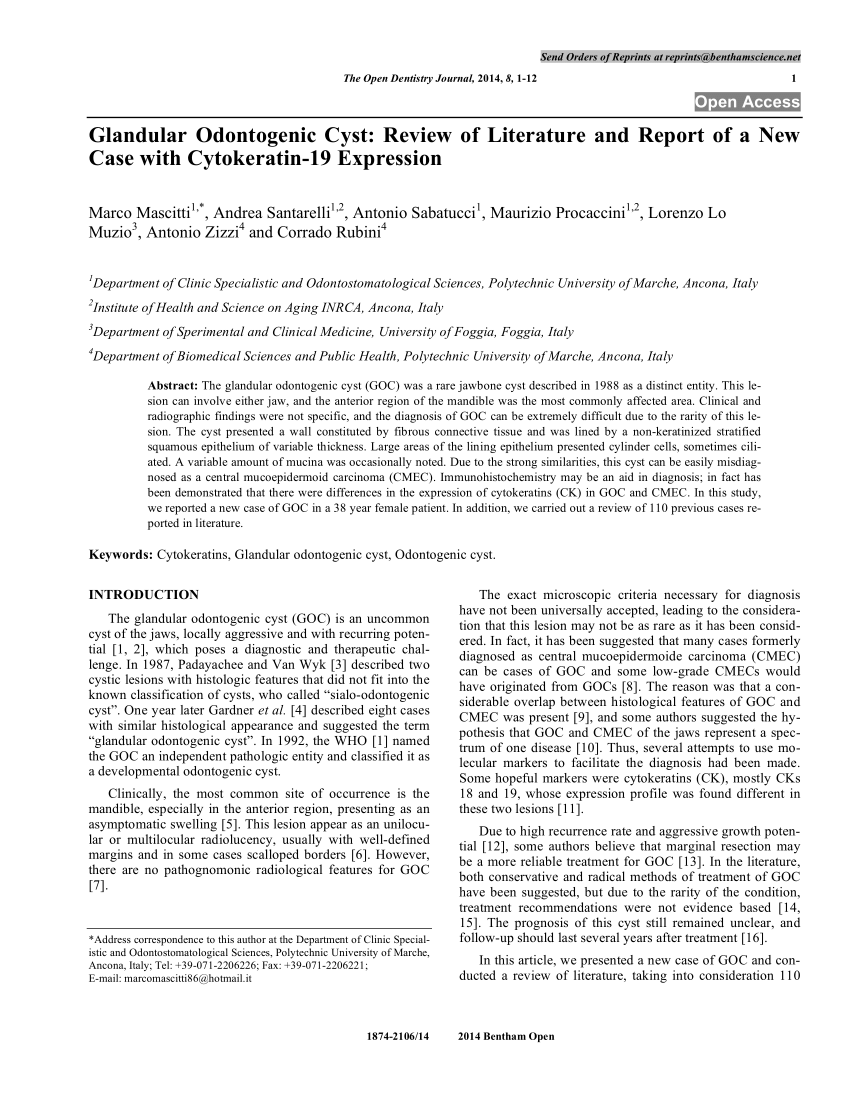 Only those statistical analyses that are significant are detailed in the text and tables. The results of the SR are set out in Figure 1.

For further consideration, the full papers of all 35 reports were called up. Seven were excluded because they were either review articles or reports of odontogenic cysts, which did not include GOCs. The reference lists of the remaining reports were subject to reference-harvesting, which found another report. 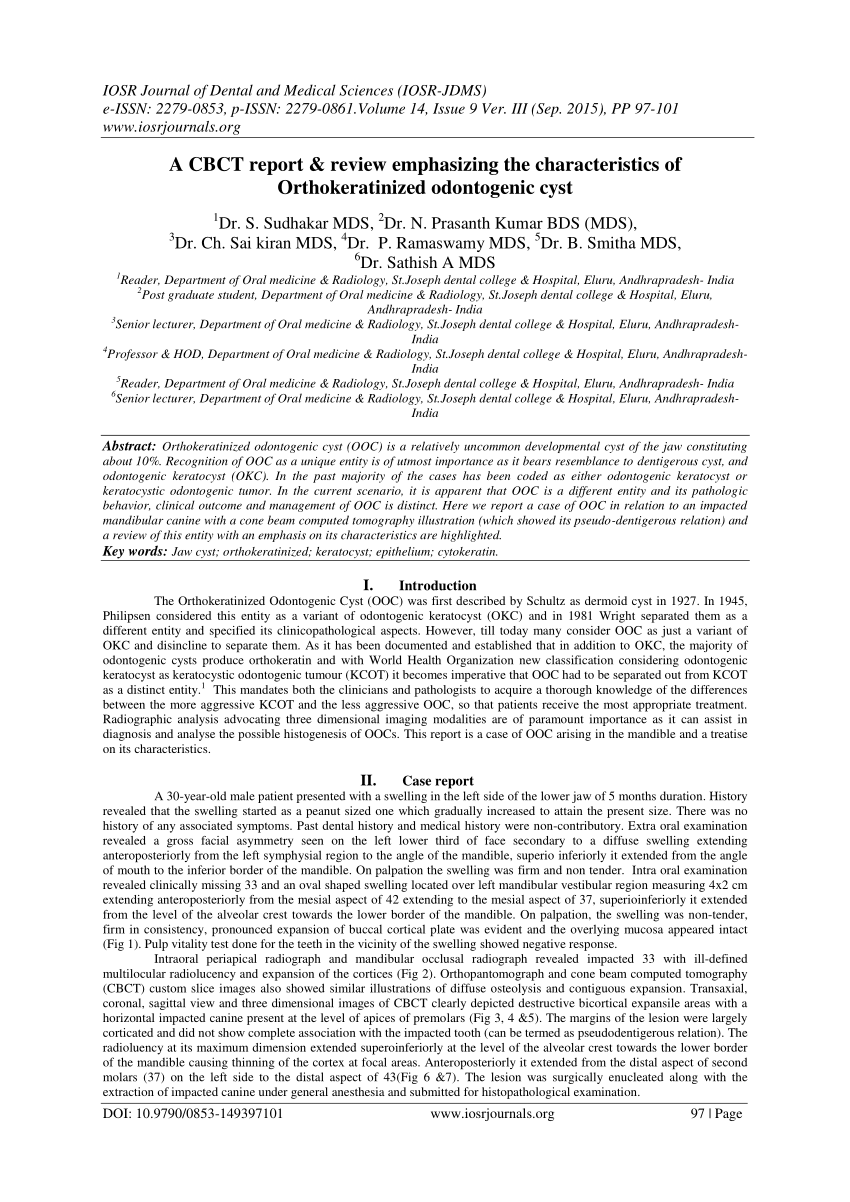 The 11 excluded reports are listed in the Appendix. Two Latin American reports were bilingual, 20 , 22 but, as one of the languages was English, they were considered to be written solely in the English language. The two SR-excluded non-English reports were in Chinese. All SR-included reports were of complete consecutive series of histologically confirmed cases of GOC presenting for the first time for diagnosis and treatment within a particular community. Therefore, 17 case series were included in the SR.

There was a predilection for males overall and in most global groups, except for the sub-Saharan African global group Table 3.

The mean age at first presentation was significantly lower for the East Asian and sub-Saharan African global group each represented by only one report than for the Western global group Table 2.

The sole Latin American representative first presented at the age of 52 years, 20 which was older that the mean age in the Western global group. Table 4 shows a comparison among eight reports of the distribution according to age in decades.

These periods were 7. Swelling, pain and discovery as an incidental finding upon first presentation displayed no significant predilection for any global group. Swelling was the most frequent clinical presentation. A case of numbness was observed in only one Western report, 24 but had been at least considered in an East Asian report. There were 11 reports disclosing the distribution of GOCs between the mandible and maxilla. The mandible was affected almost three times more frequently than the maxilla.

Location of the lesions by quadrant or sextant was specified only in eight reports for the mandible and five for the maxilla Table 3. The GOC has a predilection for the anterior sextants of the mandible and maxilla. Although five of Noffke and Raubenheimer's 23 six mandibular GOCs affected both anterior and posterior sextants, the most conspicuous feature of four of them was that they were bilateral and thus crossed the midline. Table 5 contains eight SR-included reports covering all global groups; only one report each represented the East Asian, sub-Saharan African and Latin American global groups.