Paul Rand Next Pdf To Jpg

In the trade we call this "post-rationalisation" and it's worse than worthless, it magically adds value to the worthless.

Good design, especially good logo design, is self evident and doesn't need this kind of drivle. Also, it's objectivley a bad logo.

Always has been. Always will be. It makes me angrier than it should, but that's why designers design I suppose. I personally feel its a great logo, for just one reason: It stands out, and is instantly identifiable. And I think the "drivle" is excellent, as it gives a window to the way the designer has thought about the design. And I can relate with most of what he has to say. I am sure, with multiple iterations over the current logo just like what Apple's main logo went through , you'd arrive with something elegant with all the points made in the document in mind.

Sometimes what designers consider beautiful, usable, sensible etc absolutely stumps a regular user. For instance, the Google Play Store icon is so pointless but beautiful indeed that my mom could never understand why it has a triangle rainbow in the middle of a what looks like a "lock". As the doc says, a logo must have "a promise of meaning and the pleasure of recognition" which I think the "next" logo does. I am no designer, but I think that designers can be so "in to" certain design principles that they might forget about a majority of the population that just doesn't "get" certain things, no matter how beautiful the design happens to be.

I look at the Walmart. On the face of it, you make some good points. Here's why I think you're wrong.

I could point out that 'It stands out, and is instantly identifiable' is the weakest of arguments in defence of a design. I could photocopy my arse and stick the words 'Burger King' next to it, set in comic sans. That would tick all the boxes that sentence mandates. But that's as cheap a retort as it was an argument.

It's not enough to be distinct. A designer has to be distinct within the constraints of a brief. Which leads me to your second point. Does a company every get the opportunity to sit each and every potential customer down in front of a power point presentation to explain the subtlety, nuance and reasoning behind a design? So who is this rationalisation for? If it's really necessary to explain a logo this way, then the logo is flawed. But in reality though, these sorts of documents aren't needed.

They're just marketing nonsense to help the agency close a deal, mixed with ego and vanity. As I mentioned in my first comment, good design is self evident.

Looking at it is all you should ever need to do to validate it. That said, a a designer, you do need to think beyond that first impression.

You need to build in the "quality" that's never going to be immediately apparent, but sorely missed later down the line if you've left it out. Quality in design is a real tangible thing but what it is varies between the types of thing you're designing.

Let's use this travesty of a logo as our case study. Does it work well in black and white - yes.

Does it scale up and down well In print you'd have problems at smaller sizes but on screen, well see the next point Does it look good on a computer display? This logo highlights every limitation of computer displays at the time, and hit's none of the advantages.

It's almost as if they designed a logo specifically not to work on a computer display from And this is the real kicker.

Paul rand next pdf to jpg

Call me old fashioned, but a logo has to work on thing it is a logo for. Right now I can't think of an exception to this rule, but even if there is one, a logo for a computer hardware and software manufacturer has to look good on screen. That's non negotiable. The first two "quality controls" are typical for all logo breifs - this control was unique to this brief at the time And now we get into your comments on the design industry which I think are perfectly valid.

Yes, designers can be snobs.

Yes, there's a wealth of so called "good" design out there that is actually "really really bad" design. I think that's the culmination of a few thing. Primarily, designer is now seen as a "cool" career which has attracted too many people who can only react to trends, not create them. There are also companies like Google who look like they "get" design, but clearly not only do they not get it, they don't value it and they can't even copy it. So you end up with what you describe - bad design being paraded and hailed as good design.

A vocal set of design tourists, hapless wannabes regurgitating nonsense and it's all drowning out the good work. Paul Rand may well have been the first of these hapless wannabes, here's how Steve Jobs described workign with him. If you want options go talk to other people. What a prick. If you want to be an artist, go slum it in the gutter with the rest of the artists.

If you want to be a designer, treat the customer with a bit of respect and give them some damn options. But there is still good design out there. Good designers aren't snobs.

Their work is not trend based. They're not artists and don't think of themselves as artists, they skilled labourers. The ones that are driven by trends, who do think of themselves as artists, often have very unrewarding and usually short design careers. Design is like the world. It'd be great if it weren't for all the people. The bit about Pepsi energy fields and globe dynamics is my favorite, but it is all kind of amazing. Edit: By comparison, this NeXT logo document seems pretty tame.

Mostly describing the intent behind font choices and getting people's attention.

Making the 'e' small does help prevent the all-caps design from looking like it has 'EXIT' in it. And for what it's worth, I kind of like the NeXT logo. It looks a bit dated today, but it's not bad. Very 80s futurist.

But that Pepsi logo document is obviously satire, in the spirit of "Transgressing the Boundaries: Towards a Transformative Hermeneutics of Quantum Gravity". When it was leaked a few years ago, it was widely reported to be an actual document.

All of the articles from the period said that Arnell Group wouldn't comment on its authenticity. I think it was definitely created by Arnell Group, but whether it was actually prepared for Pepsi's executives or whether it was a viral marketing campaign is still pretty much unknown. I put an asterisk in my second comment that was meant to link to the very example. I forgot to do it, glad you brought it up. Why is it objectively bad? Logos are pretty subjective things. It's as subjective as claiming that Bieber is the greatest musician of all time.

I don't know The Mystery Sonatas are quite good aren't they? Won't scale well, will unbalance anything it's put on or put along side of. Subjectively- color pallets is awful. Font choice is poor. In my view Paul Rand was never a "great" designer, just a prolific one. I disagree. I think the logo is nice, I think it looks ok even in small size, I don't think it unbalanced the NeXT machines when it was put on them, I think the colors are cute and the font is sharp.

Well, fair enough. I don't think you would be a good designer though. As brutal as that may sound, design is a full contact sport. I'd say the same to you in person. Your comment fascinates me, as if you feel you can uniquely tease out the objective from what most consider largely subjective.

I'm not contesting, just curious for elaboration. Is it designer hubris, like audiophile, or wine tasting hubris, or a reproducible, measurable thing? Are you implying that he'd be a bad consumer as well, because he responds abnormally, and that other laymen would have less appreciation for the Next logo?

Does your experience let you tap into something fundamental? 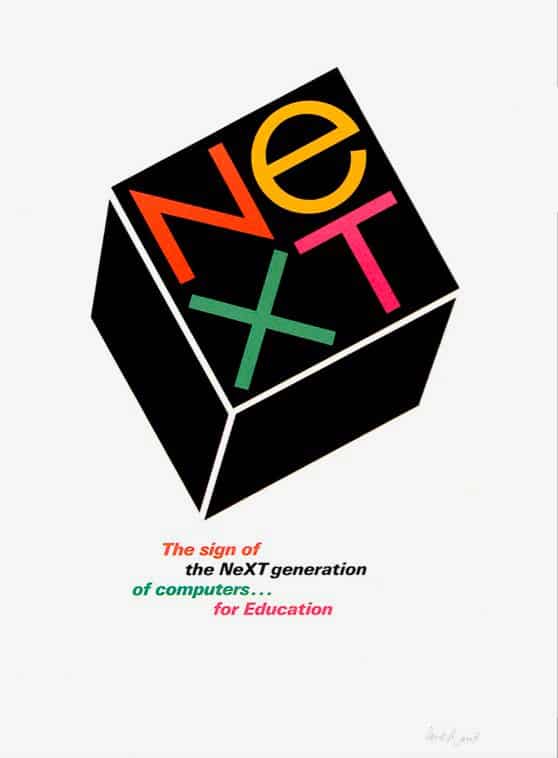 Do people universally react similarly to certain design features in an exploitable way?