One unpleasant reality about Turkey is that despite the passage of time, many of its problems are fundamentally unchanged. I first saw this years ago at the library when I was poring over old newspaper headlines. 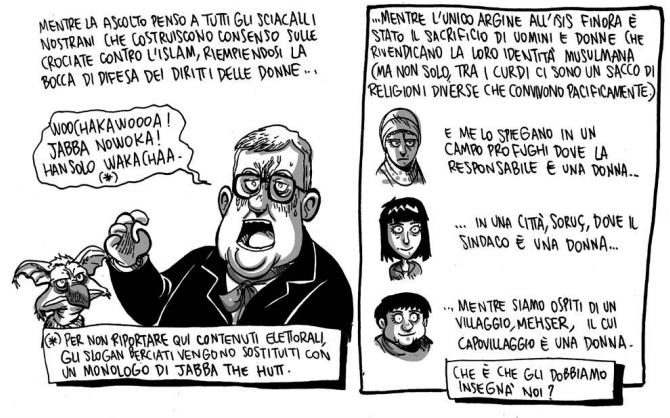 In Turkey and in some other countries, the leaders may change but everything else stays the same—price increases, unemployment, inflation, and terror.

Unemployment, price hikes, and the Southeast were still in the news then. Allies claimed the operation interfered with fighting ISIS.

Some factions claimed that if the Turkish army started operations in this region, it would increase the possibility of ISIS regaining power.

Kobane Calling was first published in in Internazionale and was later made into a book.

While observing the war between the Kurds and ISIS, Zerocalcare included in his graphic novel some claims that most people were hearing for the first time. Zerocalcare also includes the claim that the Turkish army was cutting the electricity so ISIS volunteers could cross the border.

Another interesting claim in the book is that no one is truly fighting ISIS and that the war is being deliberately dragged out even though ISIS could be quickly eliminated if that were the goal.

One example of this contrast is the images in Western media that show pretty young Kurdish women fighting in Kobane while in Turkey, Kurds are portrayed as bearded, hairy old men. In one chapter, the Rojava Model, Newroz Kobane is a young girl who is the leader of a camp; she explains how women have other important positions.

The refugee camp is run by a woman.

The chief of Mehser is also a woman. When talking to Zerocalcare, she explained that the Turkish government has not paid a penny for the camps, which are in fact supported by volunteers and Kurdish cities. But in other countries, when looking at non-Turkish-language broadcasts, we see a completely different picture.

However, while these inconceivable events are more visible now than they were in the past, the things foreign media are reporting are still closer to the truth. Tiny Url.

Kobane calling. The opinions expressed in this column are those of the author and do not necessarily reflect those of Ahval. Three Turkish soldiers killed in car bomb attack in northeastern Syria.